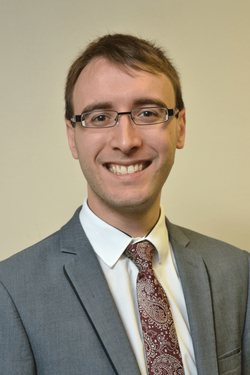 During his time in Birmingham, James studied with Professor David Saint and Henry Fairs, and held organ scholarships at St Chad’s RC Cathedral and at the Town and Symphony Halls, working closely with Thomas Trotter.

Soon after graduation, with First Class Honours, he achieved both the Associateship and Fellowship diplomas of the Royal College of Organists (ARCO & FRCO) within a year, winning the Limpus, Frederick Shinn, Durrant, Doris Wookey and Dr F J Read prizes at ARCO for gaining the highest marks in the performance components, as well as the highest overall mark.

From 2010, James held posts as an organ and theory tutor at the Junior Conservatoire, Musician-in-Residence at Old Swinford Hospital, Assistant Director of Music at St Peter’s Collegiate Church, Wolverhampton and accompanist to Walsall Choral Society, before taking up the role of Sub-Assistant Organist at Worcester Cathedral in 2012.

In Worcester, James accompanied the Cathedral Choir for daily services, directed the Cathedral Voluntary Choir (the only voluntary choir in the country made up of boys and men) and performed with the Philharmonia Orchestra in the 2014 Three Choirs Festival.

Other career highlights include playing for Pope Benedict XVI during his state visit to the UK in 2010 at Oscott College (which was broadcast on live TV), performing a solo recital as part of the 2011 Worcester Three Choirs Festival (as part of his ARCO prize) and participating, as an organist and as a director, in BBC broadcasts.

James was awarded Honorary Membership of the Royal Birmingham Conservatoire (HonRBC) in 2015, in recognition of his contribution to the profession of music.