​Leo Byrne learned the piano and cornet as a child, but only started violin  lessons with Eugene Genin, his future father-in-law, at fourteen and within 2
years was in the National Youth Orchestra. He won a scholarship to King’s College, Cambridge where he co-led the orchestra, and was awarded prizes for
French and Classics and a Keasbey bursary. He was also taught by Hugh Maguire of the Allegri String Quartet, and Clifford Knowles of the RNCM, and
he gained an LRAM (Violin Performer) from the Royal Academy in 1990.

He had 7 children with Catherine, who died in 2008. They are all good amateur musicians, but only Nick is a professional, a cellist who plays with the Northern
Sinfonia and freelances with all the main orchestras.
He is now married to Amanda Keeley, a violinist in this orchestra and International Examiner for Trinity College, London, and they have Harry, a promising trumpeter.

He worked as a teacher of French, Italian, Maths, Latin and Ancient Greek, but left teaching to be a violin Maker. He now plays on one of his own bows, on
the Sartory/Hill model. He conducted two amateur orchestras for 15 years, and now directs the Genin Orchestra every summer at Rydal Hall in the Lake District. All his children play in it, and one year 17 of his relatives were members!

He has performed the Beethoven, Mozart 4, Bruch, Mendelssohn and Vivaldi concertos with this orchestra, and his Lark Ascending was very well-received in July of 2019. He has been leader of the Metropolitan Cathedral Orchestra for 10 years, and much enjoys his association with the other members and especially Professor Stephen Pratt, the conductor. 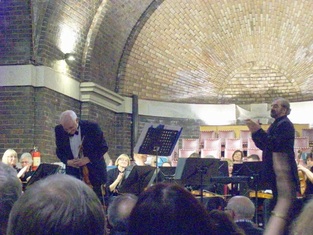 Born in 1951, Leo started the piano at seven, the cornet at nine and violin at eleven. At fourteen he had his first private violin lesson from Eugene Genin MBE and within two years was a member of the National Youth Orchestra.
While in the orchestra Leo was taught by Hugh Maguire of the Allegri String Quartet and later privately by Clifford Knowles of the Royal Northern College of Music.

Leo won an open scholarship (in French and Latin) to King’s College Cambridge. A college bursary enabled him to study Italian for three months at the British Institute, Florence, and he then went up to read French and Italian.
At Cambridge he won the Tilley Prize for French, the Walter Headlam Prize for Classics and a Keasbey Bursary. He was co-leader of the CU Music Club Chamber Orchestra.
When Eugene Genin died in 1983, Leo took over the direction of the Oxton and Claughton Orchestral Society and the South Liverpool Symphony Orchestra for ten years. He still directs the Genin Orchestra at Rydal Hall in the Lake District.

In 1990, after gaining an LRAM (Violin Performer) at the Royal Academy of Music, he left teaching to work full-time as a violin maker. He is now head of
Classics at Caldy Grange Grammar School. He makes every bit of his bows, modelled on Lamy and Sartory but using the methods of the modern English
(Hill) school, and today performs using a brand-new Guarneri del Gesu violin made by Ian Highfield of Buxton and one of his own bows.

Recent and Forthcoming appearances with the Cathedral Concerts SocietyRecent and

As Leader, Leo is usually involved in any concert with the Cathedral Orchestra

Picture: Leo acknowledging applause from an appreciative audience after a brilliant performance of the Mendelsohnn Violin Concerto on 4 Feb 2012