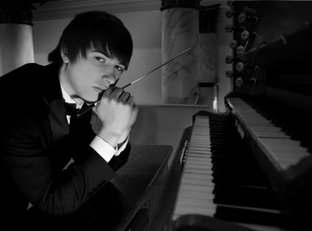 Michael Graham was born in 1991 in Liverpool. He took up violin and piano in High school and at 14 played his first church organ at St Thomas’s church in St Helens and was immediately hooked. Following this Michael was awarded the organ scholarship at St Bartholomew’s Rainhill.

In 2007 he began studying at the Junior Royal Northern College of Music studying voice with Jeff Lawton, piano with Clare Cocks and conducting with Dane Lam. Michael enjoys playing and conducting for various choirs, conducting highlights from Handel’s Messiah with St Bartholomew’s church choir and chamber orchestra at 18.

After completing his A levels at Rainhill High school 6th form, Michael auditioned for, and was subsequently awarded the organ scholarship at Liverpool Metropolitan Cathedral. It was here that Michael studied under organists Tim Noon, Richard Lea and Phillip Arkwright. He completed his organ scholarship by giving an organ recital in the Summer concert series.

This year Michael takes up a year as a choral scholar at St Davids Cathedral, Pembrokeshire, where he will study under organists Simon Pearce and Daniel Cook.

Recent and forthcoming appearances with the Cathedral Concerts Society